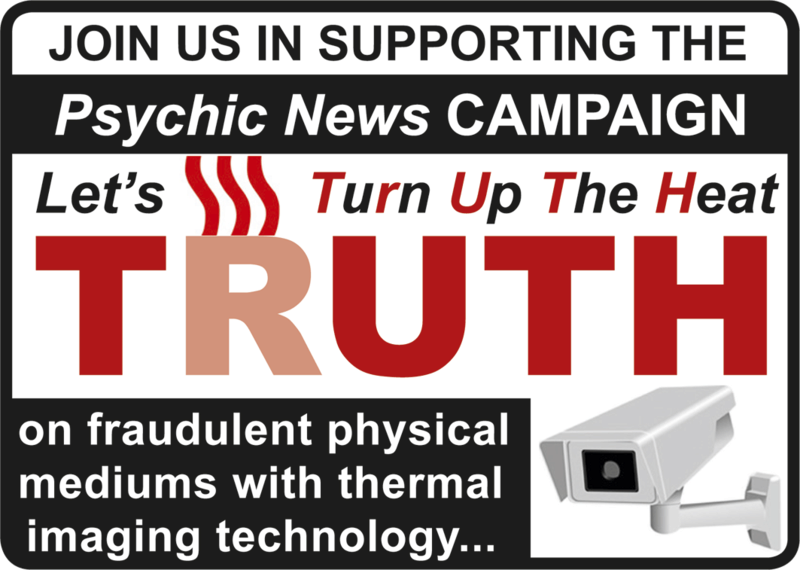 Psychic News' TRUTH Campaign for thermal testing of physical mediums gets major backing from three continents
by the Editor
http://www.psychicnews.org.uk/articles/Psychic-News-TRUTH-campaign


IN A dramatic move designed to verify the genuineness of physical mediumship and, at the same time, rid Spiritualism of charlatans pretending to produce physical phenomena, Psychic News has joined forces with the Spiritualists’ National Union (SNU) and the Banyan Retreat to change perceptions and challenge the procedures surrounding such séances.
This informal coalition follows the exposure of Gary Mannion’s blatant fraud, revealed by covert infrared filming of his “physical mediumship” at Banyan Retreat, Kent [PN July, August and September 2016] earlier this year.
His ability to fool many people poses serious questions about the involvement of Spiritualist churches – some of them SNU members – and independent centres in unwittingly exposing their followers to fraudulent activities.
It’s difficult to know if Mannion once had some genuine physical mediumship ability, but as his physical séances for three years or more have followed the same pattern as the “séance” caught on video, this is now being questioned.
Physical mediums have produced some spectacular results over the years, manifesting remarkable phenomena combined with impressive evidence of life after death. But even the best have been accused of fraud – often unjustifiably, it seems – by sceptics who refuse to believe such things are possible.
The major problem with most accounts of materialisations and other ectoplasmic phenomena is that they usually occur in darkness or in low light conditions, often making eyewitness accounts less than reliable.
Psychic News believes it is now time for Spiritualists around the world to unite in stamping out fraud by utilising new technology before the activities of fake physical mediums like Mannion do long-lasting damage to the Movement.
As a first step, we are campaigning for every physical medium who demonstrates publicly to be tested using the latest, non-invasive thermal technology. We are also inviting all Spiritualist churches and centres to give their support to this campaign by agreeing to allow only those physical mediums whose abilities have been verified by thermal imaging technology to demonstrate on their premises.

The solution
The Catch 22 situation is that whereas a genuine medium appears to need a room largely devoid of light to produce physical phenomena – just as a seed needs darkness in order to germinate – a fraudulent physical medium also needs those same conditions in order to fake the interaction of spirits with objects or people in the room.
So how do we distinguish one from the other?
The good news is that new passive technology now exists that makes it possible to record activities in a darkened séance room without emitting any form of light. What thermal imaging cameras do, instead, is detect heat in the form of infrared emissions (body heat) from each individual in the room. This should make it possible, when the recording is reviewed, to see if the medium or anyone else moved from their seat during the event.
Psychic News believes the time has come for action and has proposed a two-pronged campaign that calls for testing of mediumistic abilities and creates greater global awareness of the standards expected from those individuals who claim to possess physical mediumship.
We believe it is essential that those physical mediums whose abilities are sufficiently developed to provide their services at various venues and to receive remuneration for them – Mannion would have been paid in the region of £500 for his fraudulent mediumship at Banyan Retreat – should submit to an independent thermal imaging check of their abilities.
Such a scheme needs the support of centres in the UK and other countries to send out a clear message that Spiritualism is turning up the heat on fraud by using heat-sensing technology and any other suitable scientific equipment.
We are calling it the TRUTH campaign (TuRn Up The Heat). Churches, centres and societies can show their support on our Facebook page and a list of those that support it will be made public. We will, in time, also publish the names of those mediums who participate by demonstrating their abilities under the scrutiny of a thermal imaging camera.
The Spiritualists’ National Union (SNU) was quick to give the TRUTH campaign its full support. On 26 August, Minister David Bruton, SNU president, informed us: “We discussed your campaign at our officers’ meeting last evening and today I have sought direction from the full National Executive Committee.
“I am pleased to tell you that they are unanimously in favour of providing the full endorsement of The Spiritualists’ National Union and support for your campaign…. Needless to say, I hoped that this was the reaction we would get and I look forward to working with Psychic News in helping to mould the future of Spiritualism in the 21st century.”[/td]

Testing in other countries
The Australian Academy of Spirit (AAS), based at Universal Cottage on Queensland’s Sunshine Coast, which has also given its support to our TRUTH campaign, is leading the field in setting new standards on that continent.
It stipulates that “all physical mediumship by AAS members or visiting mediums will now be conducted in some or full red light or, where not possible to conduct in red light, there will be non-intrusive thermal imaging, full spectrum or infrared cameras on and recording!”
The needs of the medium and the requirements of the AAS will be discussed and a mutually acceptable situation agreed upon. It is, however, determined to provide “a level playing field” for all physical mediums.
“We have in the past allowed certain mediums to remove the cameras and regretted it,” Debbie Bozicevic-Mewes, AAS president and founder, tells Psychic News.
She reveals that Gary Mannion was invited to demonstrate his physical mediumship for the AAS after he participated in a Symposium on Physical Mediumship organised by the Wallacia Development Centre, Sydney, two years ago. Mannion is closely associated with Wallacia and returned there from the UK in August this year.
“When informed of the cameras (after we experienced his appalling work twice at the Wallacia Symposium, the second time to make sure we were correct) Mannion declined the booking saying that his ‘team’ do not work with cameras,” Debbie continues.
“The Wallacia Physical Mediumship Symposium was to have Garry Mannion, Kai Muegge and Warren Caylor, as well as Gordon Garforth who was also in attendance as a transfiguration medium and whose work was impressive in red light.
“Warren arrived, was accused of fraud by Mannion and after some very unfortunate incidents Caylor got on a plane back home before the symposium started.
“Caylor contacted me from Dubai to tell me of the incidents. Muegge, who was also to be at the symposium before coming on to the AAS (where he was to give seven fully booked séances) was stopped at the airport and deported for not having the correct visa.”
So the only medium in attendance at the symposium was Mannion. Debbie Bozicevic-Mewes says that those who knew better became angrier and angrier at the level of fraud they witnessed at his séances.
British-born medium David Thompson, who now lives in New Zealand, had impressed the AAS president some years ago but when he gave three physical séances for the academy she received 10 complaints from sitters, some of whom reported having their toes trodden on by the “spirits” – though it has been argued that this was merely a demonstration of a materialisation’s presence.
Thermal imaging would have settled that argument but Thompson had demanded the removal of cameras from the room prior to his séances.
This month, Helen DaVita will be running a physical mediumship course at the AAS’s specially-designed séance room, which will be filmed by the academy’s thermal imaging equipment. Her trance and transfiguration séances, held in red light, have been filmed in the past but this will be the first opportunity for AAS to capture physical mediumship on camera. We look forward to reporting on the results.
It is hoped that North America will also soon have a test centre that will verify the claims of physical mediums living on that continent or visiting from overseas, if they have not already been tested in their home countries. This follows the whole-hearted support for the TRUTH campaign from the American Society for Standards in Mediumship and Psychical Investigations (ASSMPI) which is currently searching for a suitable test centre.
Its president, Jock Brocas, tells Psychic News: “The ASSMPI is dedicated to raising standards in all aspects of mediumship. This is the main focus of our charity and our mission to give service to Spirit and raise standards in all practices. This includes mental, trance and, in particular, physical mediumship.
“The very fact that we also have the Helen Duncan Foundation under our auspices means that we have a real desire for transparency within the practice of physical mediumship. Due to recent events we have had to re-evaluate our position and expand our protocols.
“One of our major goals is to develop a centre of excellence and research in the USA. Furthermore, we can confirm that we will be moving towards more stringent protocols in the testing of physical mediums to include, but not limited to, the use of thermal imaging as well as other protocols that we are developing to create a balance between Spirit and science.
“It is our desire to work hand-in-hand with all organisations and retain an a-political and non-judgmental stance. We believe that together, as a Movement, we all have to protect mediumship, our public that needs us, and our mediums.
“We will not support or stand for any fraudulent mediumship, no matter who, where or by whom, and our goal is to raise our standards, to remove the desire for material superiority, and to bring the message from Spirit through Spirit and to Spirit.”
ASSMPI’s decision is also of historical importance since its board members include Margaret Hahn, granddaughter of famous physical medium Helen Duncan.
Psychic News encourages all churches and centres to support our TRUTH campaign and allow only physical mediums whose abilities have been confirmed by thermal imaging technology to demonstrate to the public on their premises.
Church officials can do so on Facebook.com/psychicnews/. We will also be pleased to have the public support – on Facebook, Twitter or Instagram, for example – of individual Spiritualists who agree that now is the time for action.
This important initiative will be of great benefit not only to Spiritualism and those who attend séances but also to those genuine physical mediums whose dedicated work is being tarnished by the efforts of frauds.

Click into the date for latest news
Wednesday, 15th July