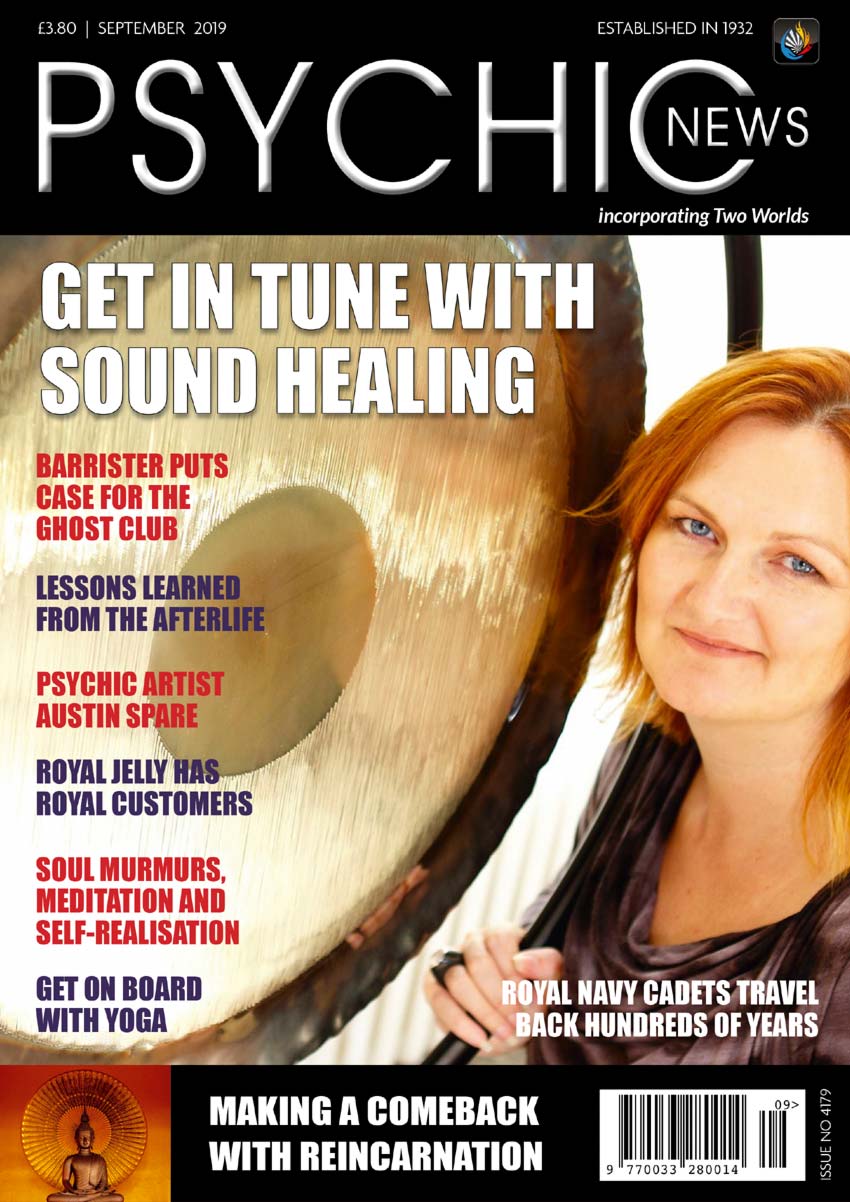 In the September 2019 issue of Psychic News, healer Lyz Cooper describes her fascinating journey with sound, and how and why sound and music can be effective therapeutic tools, presenting her BAST Method system of healing. Includes sound-based exercises you can do at home and some links to some therapeutic music tracks.

Medium Claire Broad, whose book, “What the Dead are Dying to Teach Us,” comes out this month, tells of her spiritual journey and one special piece of evidence she gave her Nan. In 'Irene’s buzzing with royal jelly joy' Irene Stein, whose “unique” product based on royal jelly, has been taken by the Queen, Princess Diana and the Duchess of York, says she has been guided by intuition “for many years.” Taking time off from appearing in court, barrister Alan Murdie, who is Chairman of the Ghost Club, answers a series of points about the organisation and the paranormal.

Taking inspiration from singer and songwriter Chesney Hawkes, Barbara White features rebirth and group souls in 'Making a comeback with reincarnation'. In an interview, yoga teacher Mara Blackburn tells Billy Roberts how yoga can even be undertaken on paddle boards in the sea. Graham Jennings answers three readers’ questions and starts by homing in on psychic artist Austin Spare. Writer, counsellor and healer Wendy Stokes reviews the new “Oracle of the Fairies” card deck, which is produced by a former BBC journalist. And John West investigates the intriguing case of three young naval cadets who entered a time slip.

In the news, we feature the Queen banning plastic straws and bottles from the various Royal estates, missing therapy goats, American research into the effectiveness ‘therapy dogs’ on college campuses, and an expert on dreams being invited to address staff at the Ministry of Defence.

We also feature an exclusive Graham Jennings report on the “2019 Joint Conference on Aspects of the Afterlife,” and celebrity encounters with phantoms and UFOs.

Krazy Kats:
A friendly forum discussing and sharing issues that we care about.
~ Come and check us out ~
https://krazykats.forumotion.co.uk/
Current date/time is Tue 30 Nov 2021 - 6:47