The Video of the Week now showing on our Portal page is: 'PSYCHIC' (Parts 1 and 2)
3 posters

Over on the Krazy Kats forum, we have a thread that records significant things relevant to "This day in History", provided by The Free Encylopedia, it changes every day.  One of the events recorded for today (13th March) is the following (Post no. 122 - HERE ) : 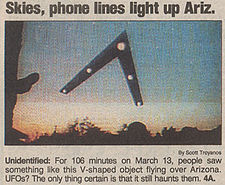 The Phoenix Lights: Aliens or Air Force?
In 1997, thousands of people reported a series of optical phenomena - since known as the Phoenix Lights - taking place in the skies over the US states of Arizona and Nevada.  The sightings consisted of two events:  a triangular formation of lights observed passing overhead and a series of stationary lights seen in the Phoenix area.  Although the US Air Force identified the second group of lights as flares, many believe the first set of lights were those of a UFO, including what notable politican?  More...

As this is something I personally am not too knowledgeable about, I looked it up to see if I could find out more about what happened there.  I found this documentary:


This documentary was made (or at least updated) in 2009. Anyone know if there has been any repeat or any further info discovered since then?
evergreen

It was mentioned on the local CBS news this morning here in AZ.  How folk love mystery!

Well, I have to admit that this whole UFO thing is not a subject I have too much of an interest in.  Brings back a memory though of an interesting 'situation' I encountered on a visit back home to Ireland.  It would have been around 1975 or 1976.  Having flown to Dublin Airport, I got the shuttle bus to the city centre 'Busaras', the main bus station for provincial coaches to all areas outside of Dublin.  I was heading to Newtownmountkennedy, my home town in County Wicklow, 21 miles south of Dublin, to stay with my family for a few days.  In those days the bus journey took just over an hour, passing through Bray (where I went to school) 9 miles from Newtownmtkdy.  When you reached Bray you were officially entering Co. Wicklow, and the surrounding mountains which up until then were the 'Dublin Mountains' turned into the Wicklow Mountains, and just outside of Bray the bus passed by the foot of the Sugarloaf mountain.

Struggling up the steep steps into the coach with my baggage, a kind English gentleman came to my assistance. The bus was already quite full with a party of what looked to be scouts (adult ones) with backpacks and all sorts of stuff they were carrying with them to put on the overhead racks - as the baggage hold at the back of the bus was already full up with mostly all their stuff.  I sat next to my kind helper and we got chatting.  Turned out he was the 'scout' leader and the story he told me was that they were all heading out to the Sugarloaf Mountain to camp out for the weekend, as there had apparently been UFO sightings there recently, and they were expecting more of the same that particular weekend.  Well, of course I took all this with a pinch of salt and assumed it to be all just a load of blarney.  He was most indignant on hearing my reaction though, insisting that it was all quite official, gave his name as some Professor .... (wish I could remember the name now) who was apparently very well known for specialising in the subject and spoke regularly on radio and in the media, and started telling me about various UFO sightings all over the world ....
I remember asking him why, if all these so-called sightings were true, we did not hear more about it - in the news and other areas.  In reply, he said that much of it is deliberately (at government level) kept hidden from the general public, because if people were to know the real truth and extent of what was going on, there would be "mass panic throughout our planet".  He gave me his card, and the name and date of a radio programme he would be speaking on the very subject in a few days time on their return to England.
They all trooped out of the bus when we reached Kilmacanogue (at the foot of the Sugarloaf), and I honestly thought no more about it after that.  I do wish now though that I had taken a bit more interest at the time.

Had a quick look at that link, doing a search for UFO sightings in Wicklow in the 1970's - and find there's a whole section on Wicklow, calling it a "Hot Spot" for UFO sightings, and there is mention of the Sugarloaf in it, and even a mention of Newtownmountkennedy sightings, years later!  HERE
mac

Interesting story, kk.  Makes you wish you'd done  things differently.  The apparent sincerity of these individuals does make you think.....

I've often wondered, though, whether at least some of these sightings are clairvoyant/psychic.  My guess is that many individuals have psychic sensitivity they're unaware of.

So these sightings may be kosher but may also be inter-dimensional hence not seen by everyone.....  Just the idea of someone who's not a sensitive.
« View previous topic · View next topic »

Krazy Kats:
A friendly forum discussing and sharing issues that we care about.
~ Come and check us out ~
https://krazykats.forumotion.co.uk/
Current date/time is Tue 30 Nov 2021 - 6:00