A Public Debate on "The Truth of Spiritualism"

A Public Debate on "The Truth of Spiritualism"

A PUBLIC DEBATE ON "THE TRUTH OF SPIRITUALISM" BETWEEN SIR ARTHUR CONAN DOYLE AND JOSEPH McCABE is a book published by Watts & Co.) in April 1920 including the verbatim report of the debate between Sir Arthur Conan Doyle (representing Spiritualism) and Joseph McCabe (representing the Rationalist Press Association ) which took place on 11 March 1920 at the Queen's Hall, Langham Place, London W1, UK. 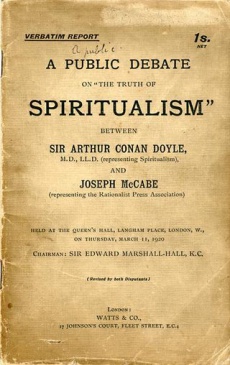 This debate originated in November 1919, through an invitation from Mr. Charles A. Watts (Vice Chairman of the British Rationalist Press Association) to Sir Arthur Conan Doyle to publicly debate the claims of Spiritualism with Mr. Joseph McCabe. The invitation was prompted in the interests of Truth only, and Sir Arthur expressed his willingness to accept it.

Mr. Joseph McCabe to open the debate in a speech of forty minutes.

Sir Arthur Conan Doyle to follow with a speech of equal length.

Mr. McCabe then to speak for fifteen minutes.

Sir Arthur to follow with a speech of equal length.

Mr. McCabe then to make his final reply in a speech of fifteen minutes.

Sir Arthur to conclude the debate in a speech of equal length.

Sir Edward Marshall-Hall, K.C., consented to act as Chairman in response to the invitation of the representative of each disputant.

It may be noted that Sir Arthur Conan Doyle was at one time a member of the Rationalist Press Association. The debate has been revised by each disputant, only verbal alterations being made.

It should be added that all moneys from the sale of tickets, after the expenses had been paid, were equally divided between the two organisations represented by the Disputants. Any profits from the sale of the Report of the Debate are to be similarly allocated.

Click into date below for latest updates
Saturday, 16th October 2021

Krazy Kats:
A friendly forum discussing and sharing issues that we care about.
~ Come and check us out ~
https://krazykats.forumotion.co.uk/