The Video of the Week now showing on our Portal page is: 'Was Queen Victoria a Spiritualist?'
3 posters 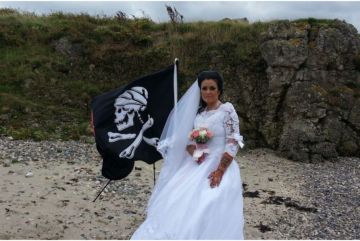 A Northern Irish woman who made headlines around the world after marrying a 300-year-old pirate ghost has opened up about why she decided to divorce her spirit lover.

Amanda Teague from Downpatrick wed her ghost husband Jack on international waters back in 2016.

They first met in 2010, when Jack “presented himself” to her. One thing led to another and they were soon wed.

But it wasn’t long before Amanda started to notice cracks in the relationship - like the fact he was trying to kill her.

With her health quickly declining, she realised Jack was “using” her...as an energy source.

“My health just kept getting worse and worse and worse, to the point where I ended up with sepsis last year, in June, and I almost died,” she told Eamonn Holmes on This Morning. “I had to have an emergency surgery.”

The 46-year-old was soon forced to confront the truth that was staring her in the face.

“Jack was basically an energy vampire,” she explained.

“When we die it’s normal to stay in the Earth-bound realm for a period but when spirits stay around too long, they need an energy source.

“And unfortunately, Jack was using me as an energy source.

“He had never accepted his own death, so he wanted to continue living through my body.”

Woman Divorced Her Ghost Husband After He Tried to Kill Her | This Morning TV
Well versed in the realm of possession and spirit attachment, Amanda was given little option but to seek divorce by exorcism back in December 2018.

Despite the distressing situation and near-death experience, she has few regrets about her marriage to a pirate energy vampire.

“I do believe that everything happens to us for a reason,” she explained.

She has, thankfully, quit all forms of mediumship in the wake of the incident.

Probably for the best.

Further related links to this story:

I just wonder how Eamonn and Ruth were able to keep such a straight face there in that interview.
Candlelight.kk

evergreen wrote:I just wonder how Eamonn and Ruth were able to keep such a straight face there in that interview.

I guess they're used to it, evergreen.  Publicity seekers are ten-a-penny ... people who will conjure up all sorts of weird antics just to get themselves noticed and get themselves known.
There are plenty of folk who will lap up these sort of self-promoting stories; the more ridiculous they appear, the more they tend to make for good TV viewing.  Whatever rocks yer boat, I suppose.

Here's another such one on a similar vein:

Why My Ghost Fiancé and I Called Off The Wedding

Philip Schofield's face says it all .....

and ... brace yourself for this one:
The Woman Marrying Her Duvet

Jeez!  I wouldn't watch such programmes anyway but that junk takes the biscuit - it's what viewers want, I guess.
« View previous topic · View next topic »

Bookmark and share the address of Light After Life on your social bookmarking website
Current date/time is Sun 29 Jan 2023 - 16:15