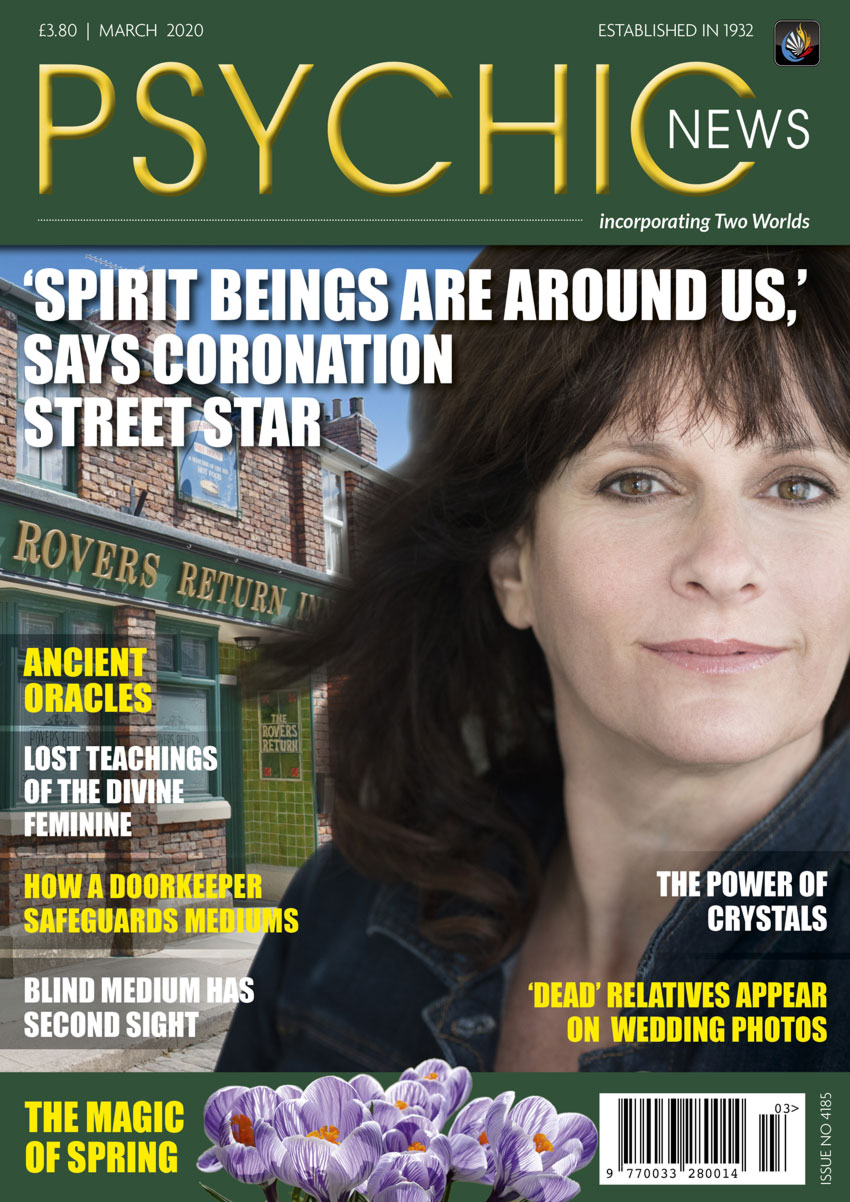 Inside the March 2020 issue of Psychic News magazine, We interview ‘Coronation Street’ star Siân Reeves, who tells of receiving absent healing and reveals her belief in life after death.

And Scottish medium Dominic Boag, who lost his sight due to a rare condition.
A missing teenager has been found safe just hours after a group of psychics liaised with police and predicted where she was.

In Features we have:
The power of crystals – Judy Hall suggests crystals to boost the immune system and counteract electromagnetic stress.
The Magic of spring – Barbara White investigates how the advent of spring is celebrated in various parts of the world.
Seeking help from female archangels – Claire Stone looks at angels and archangels, and suggests a special practice for Mother’s Day.

John West highlights more photos which were obtained paranormally, and Billy Roberts gives some tips on improving one’s memory and explains why it is essential to take breaks during working hours.

Robert Brown looks at facing death in the midst of life.

Graham Jennings features three very different topics, including a reporter who “saw” the result of horse races in advance, how doorkeepers safeguard mediums, and ancient oracles.

In News:
Church treasurer and her husband are sent to jail.
Fairies ‘could lure fishermen to their deaths’ claim.
Clairvoyant ‘sees’ where murdered girl’s body was buried.
Haunted doll ‘spoke Spanish’.
And much more.
Plus the chance to win one of ten copies of The Akashic Tarot


HAVING been in limbo for many months, in order to deal with various issues largely resulting from a transfer of ownership, the Psychic News digital archive is now back online at the University of Manitoba’s Archives and Special Collections website.

It was first launched in May 2018. The headline on the feature announcing it in these columns (PN June 2018) said it all, “Psychic News at your fingertips for free.”

We explained that thanks to a unique collaboration with the University of Manitoba in Canada, 78 years of this publication’s newspaper format editions – from 1932 to 2010 – would be made available to anyone, anywhere in the world, free of charge.

All that is needed to dive into this fascinating paranormal collection of news and views is a computer or other digital device with an internet connection.

This treasure trove of paranormal history, consisting of 4,125 issues of the weekly newspaper and its occasional supplements, was described at the time as an ongoing project that would be slowly rolled out in the months ahead.

The archive was originally owned by a Spiritualist charity, but its decision to gift it to Psychic Press Ltd, the owners of Psychic News incorporating Two Worlds, meant that a new agreement was necessary between the Canadian university and ourselves.

So, while those negotiations took place, the PN Digital Archive had to be put on temporary hold and removed from public access.

The good news is that it is now up and running again, with the first tranche of issues – from 1932 to 1967 – now available to view online.

The rest of the archive, right through to the final 2010 newspaper edition, will be added later this year. Check it out at https://libguides.lib.umanitoba.ca/psychicnews

Click into date below for latest updates
Friday, 26th November 2021

Krazy Kats:
A friendly forum discussing and sharing issues that we care about.
~ Come and check us out ~
https://krazykats.forumotion.co.uk/
Current date/time is Sat 27 Nov 2021 - 5:07