The Two Worlds (history and archives)

The Two Worlds (history and archives) 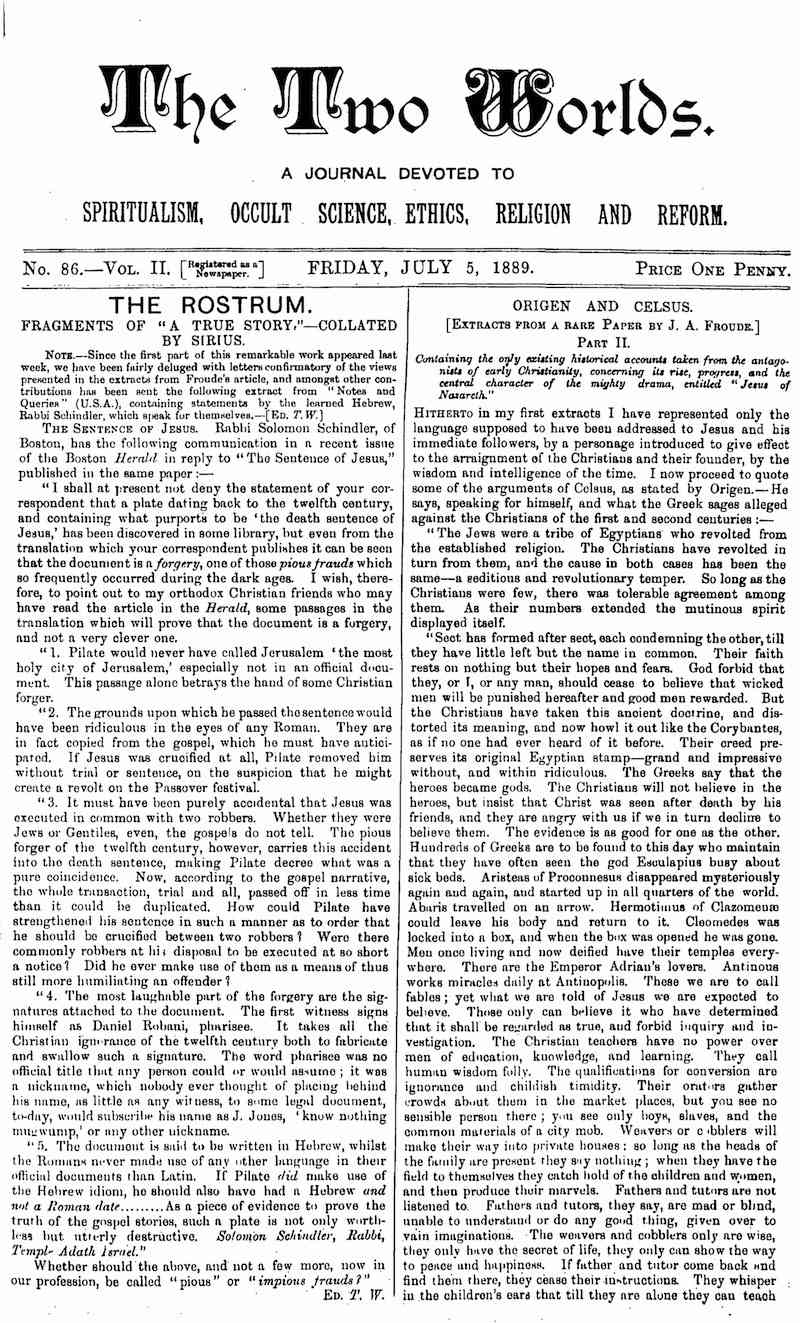 s Popular Spiritualist Paper, Devoted to Spiritual Science and Religious Progress and the Facts and Philosophy of Spiritualism.
The People's Popular Penny Spiritual Paper
1887 Weekly
London and Manchester, England. Publisher: John Heywood (London), Two Worlds Publishing Co. Limited (Manchester). Editor: Emma Hardinge Britten with E.W. Wallis as sub-editor (from 1887 through February 1892); E.W. Wallis, Will Phillips, and (from 1906) J.J. Morse; Ernest W. Oaten; Maurice Barbanell.
1/1, November 18, 1887-current. 16 pp., 8/1/2 x 14. One penny a week.
This was begun by Emma Hardinge Britten who edited it until she left in a huff early in 1892 to begin The Unseen Universe a>. The early issues bear her stamp and tend toward the occult, with excerpts from her Ghost Land and articles by "Sirius" that were heavily larded with quotations from her Art Magic. The early years of the journal also regularly featured two full pages of "Services for Sunday," announcements for spiritualist services in Britain, and three full pages of "Chronicles of Society Work," on the happenings in local spiritualist societies. The journal was less intellectual and more vigorous and provincial than its London competitors. It was "the peopleâ€

Medium and Daybreak ceased in 1895, The Two Worlds became the leading exponent of progressive, reform, non-Christian spiritualism in Britain. It continues to exist. NYPL (incomplete, 1888-1919); LOC; Boston Public Library; University of Kansas; Duke University; University of Texas, Austin; and other locations in OCLC; ZDB: Freiburg Inst Grenzgeb Psychol.
This run of the Two Worlds, from 1887 to 1892, during the editorship of Emma Hardinge Britten, is also available from The E. H. Britten Archive . The download links are located on the Bibliography, under Periodicals. Issues are retained at IAPSOP for indexing purposes.

http://www.iapsop.com/about.html
International Association for the Preservation of Spiritualist and Occult Periodicals (IAPSOP)

IAPSOP was formed in late 2009, when it became apparent to IAPSOP's founders that (a) the repository libraries traditionally expected to retain Spiritualist and occult periodicals were in many cases removing these from circulation, or from their collections entirely; (b) that independent students and researchers were in some cases duplicating effort and expense to have materials preserved digitally, largely for their private use; and (c) that digital libraries like Google Books were completely indifferent to the special curatorial problems of periodical literature generally, and occult literature in particular.

The deterioration of the primary historical source material in occult studies continues apace. For this field of study, this material consists, in a large part, in newspapers and periodicals, which are especially subject to decay and which need to be preserved in digital form. These periodicals, for the most part, were small-run, and, because of their subject matter, and were not sought out by librarians or archivists, even when they were current. Consequently, researchers in the field of occult studies now often find that, in order to pursue their inquiries, they must travel to far-flung libraries and rare book archives in order to piece together and read through incomplete periodical runs, at significant cost. The real impact of this is that modern historical research on the occult is all too often superficial and overly reliant on secondary sources.

Bringing as much primary source material as possible together into a single, digitally-searchable archive should therefore improve the quality of historical understanding of the subject.

The IAPSOP Archives are maintained by an informal collective of students, academics and researchers with an interest in the periodical literature of Spiritualism and the occult, for the purposes of preserving the substantial body of Spiritualist and occult periodical literature produced between the 1840s and the start of the Second World War. These materials are provided in curated, digital form, already indexed, suitable for online reading, scholarly use and citation.

Click into date below for latest updates
Thursday, 2nd December 2021

Krazy Kats:
A friendly forum discussing and sharing issues that we care about.
~ Come and check us out ~
https://krazykats.forumotion.co.uk/
Current date/time is Thu 2 Dec 2021 - 15:05